This tutorial implements the ProdLDA topic model from Autoencoding Variational Inference For Topic Models by Akash Srivastava and Charles Sutton. This model returns consistently better topics than vanilla LDA and trains much more quickly. Furthermore, it does not require a custom inference algorithm that relies on complex mathematical derivations. This tutorial also serves as an introduction to probabilistic modeling with Pyro, and is heavily inspired by Probabilistic topic models from David Blei.

Topic models are a suite of unsupervised learning algorithms that aim to discover and annotate large archives of documents with thematic information. Probabilistic topic models use statistical methods to analyze the words in each text to discover common themes, how those themes are connected to each other, and how they change over time. They enable us to organize and summarize electronic archives at a scale that would be impossible with human annotation alone. The most popular topic model is called latent Dirichlet allocation, or LDA.

LDA is a statistical model of document collections that encodes the intuition that documents exhibit multiple topics. It is most easily described by its generative process, the idealized random process from which the model assumes the documents were generated. The figure below illustrates the intuition: 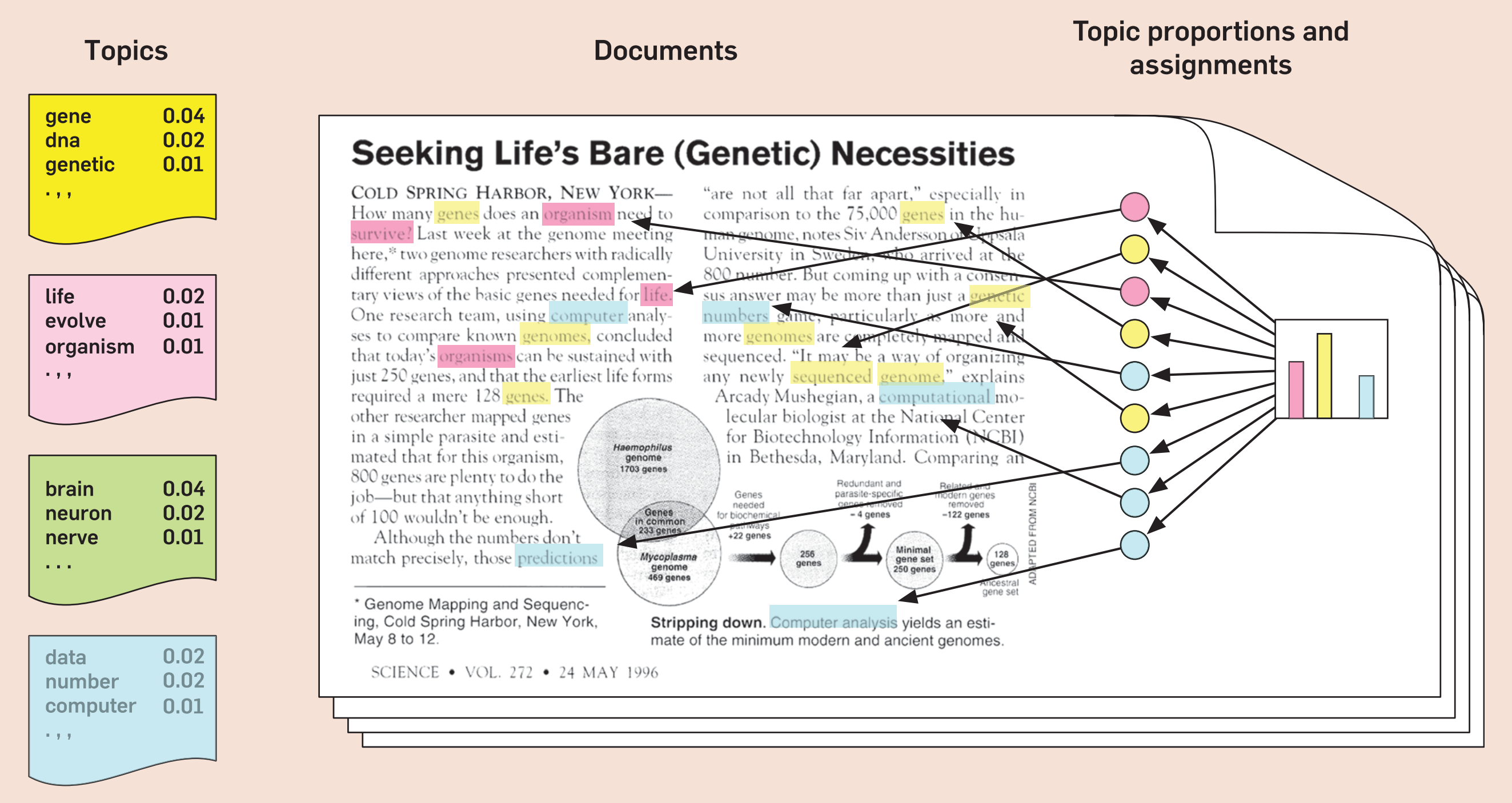 We assume that there is a given number of “topics,” each of which is a probability distributions over words in the vocabulary (far left). Each document is assumed to be generated as follows: i) first, randomly choose a distribution over the topics (the histogram on the right); ii) then, for each word, randomly choose a topic assignment (the colored coins), and randomly choose the word from the corresponding topic. For an in-depth intuitive description, please check the excellent article from David Blei.

The goal of topic modeling is to automatically discover the topics from a collection of documents. The documents themselves are observed, while the topic structure — the topics, per-document topic distributions, and the per-document per-word topic assignments — is hidden. The central computational problem for topic modeling is to use the observed documents to infer the hidden topic structure.

We will now see how easy it is to implement this model in Pyro.

Probabilistic Modeling and the Dirichlet distribution in Pyro¶

To understand how probabilistic modeling and Pyro work, let’s imagine a very simple example. Let’s say we have a dice and we want to determine whether it is loaded or fair. We cannot directly observe the dice’s ‘fairness’; we can only infer it by throwing the dice and observing the results. So, we throw it 30 times and observe the following results:

Counting the occurrences of each result:

For a fair dice, we should expect roughly 5 occurrences of each of the 6 digits in 30 throws. That is not, however, what we observed: numbers 3 and 5 are much more frequent, while 2 and 4 are especially infrequent. This is not a surprise, as we used a random number generator with the following probabilities to generate the dataset \(\mathcal{D}\):

In the general case, however, the probabilities that generated the dataset are hidden to us: they are latent random variables. We don’t have access to them, only the observations \(\mathcal {D}\). The purpose of probabilistic modeling is to learn the hidden variables from the observations only.

where \(N_k\) is the number of times we observed every digit \(k\). The likelihood for the multinomial distribution has the same form: this is the best distribution to model this simple example. But how to model the latent random variable \(\theta\)?

The Dirichlet distribution is parameterized by the vector \(\alpha\), which has the same number of elements as our multinomial parameter \(\theta\) (6 in our example). Although in this simple case we could compute the posterior over the hidden variables \(\theta\) and \(\alpha\) analytically, let’s instead see how we can use Pyro and Markov Chain Monte Carlo (MCMC) to do inference:

There we go! By conditioning the generative model on the observations, we were able to infer the hidden random variables using MCMC. We see that 3 and 5 have higher inferred probabilities, as we observed in the dataset. The inferences are well aligned with the true probabilities that generated the data.

As expected, this produces the same inferences as computed earlier. Now that we’ve had a brief introduction to probabilistic programming in Pyro and reviewed a simple application of Dirichlet and multinomial/categorical distributions, we are ready to resume our LDA tutorial.

We can define LDA more formally in 3 different ways: via pseudocode, via the mathematical form of the joint distribution, and via a probabilistic graphical model. Let’s start with the pseudocode.

Each document of the collection is represented as a mixture of topics, where each topic \(\beta_k\) is a probability distribution over the vocabulary (see the distributions over words on the left in Figure 1). We also use \(\beta\) to denote the matrix \(\beta = (\beta_1, ..., \beta_k)\). The generative process is then as described in the following algorithm:

Figure 2: Pseudocode for the generative process.

while taking the product of the marginal probabilities of single documents, we obtain the probability of a corpus:

Figure 3: LDA as a graphical model.

We now turn to the computational problem: computing the posterior distribution of the topic structure given the observed documents.

Posterior inference over the hidden variables \(\theta\) and \(z\) is intractable due to the coupling between the \(\theta\) and \(\beta\) under the multinomial assumption; see equation \(\eqref{eq:joint1}\). This is actually a major challenge in applying topic models and developing new models: the computational cost of computing the posterior distribution.

Both mean-field and collapsed Gibbs have the drawback that applying them to new topic models, even if there is only a small change to the modeling assumptions, requires re-deriving the inference methods, which can be mathematically arduous and time consuming, and limits the ability of practitioners to freely explore the space of different modeling assumptions.

Autoencoding variational Bayes (AEVB) is a particularly natural choice for topic models, because it trains an encoder network, a neural network that directly maps a document to an approximate posterior distribution, without the need to run further variational updates. However, despite some notable successes for latent Gaussian models, black box inference methods are significantly more challenging to apply to topic models. Two main challenges are: first, the Dirichlet prior is not a location scale family, which hinders reparameterization, and second, the well known problem of component collapse, in which the encoder network becomes stuck in a bad local optimum in which all topics are identical. (Note, however, that PyTorch/Pyro have included support for reparameterizable gradients for the Dirichlet distribution since 2018).

In the paper Autoencoding Variational Inference For Topic Models from 2017, Akash Srivastava and Charles Sutton addressed both these challenges. They presented the first effective AEVB inference method for topic models, and illustrated it by introducing a new topic model called ProdLDA, which produces better topics than standard LDA, is fast and computationally efficent, and does not require complex mathematical derivations to accomodate changes to the model. Let’s now understand this specific model and see how to implement it using Pyro.

So let’s get started. The first thing we need to do is to prepare the data. We will use the 20 newsgroups text dataset, one of the datasets used by the authors. The 20 newsgroups dataset comprises around 18000 newsgroups posts on 20 topics. Let’s fetch the data:

There we go! We have a dictionary of 12,722 unique words and indices for each of them! And our corpus is comprised of almost 19,000 documents, where each row represents a document, and each column represents a word in the vocabulary. The data is the count of how many times each word occurs in that specific document. Now we are ready to move to the model.

ProdLDA vs LDA. Finally, the only remaining difference between ProdLDA and regular LDA is that: i) \(\beta\) is unnormalized; and ii) the conditional distribution of \(w_n\) is defined as \(w_n | \beta, \theta \sim \text{Categorical}(\sigma(\beta \theta))\).

That’s it. For further details about these particular modeling and inference choices, please see the paper. Now, let’s implement this model in Pyro:

Now that we have defined our model, let’s train it. We will use the following hyperparameters:

Important: the training takes ~5 min using the above hyperparameters on a GPU system, but might take a couple of hours or more on a CPU system.

And that’s it! Now, let’s visualize the results.

Let’s check the word clouds for each of the 20 topics. We will use a Python package called wordcloud. We will visualize the top 100 words per topic, where the font size of each is proportional to its beta (i.e. the larger the word, the more important it is to the corresponding topic):

As can be observed from the 20 word clouds above, the model successfully found several coherent topics. Highlights include:

In this tutorial, we have introduced Probabilistic Topic Modeling, Latent Dirichlet Allocation, and implemented ProdLDA in Pyro: a new topic model introduced in 2017 that effectively applies the AEVB inference algorithm to latent Dirichlet allocation. We hope you have fun exploring the power of unsupervised machine learning to manage large archives of documents!